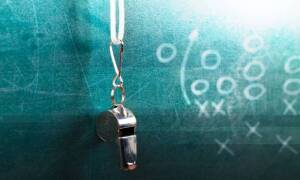 Arthur Dan Pitts passed away peacefully on April 20, surrounded by his family.  He was born in Lincoln County, Ga., the oldest child and only son of Isabelle Cartledge Pitts and Arthur Andrew Pitts. He graduated from Lincolnton High School where he enjoyed playing football and baseball for the Red Devils.  During his senior year, he was named All State Quarterback. His athletic ability helped him earn a football scholarship to South Georgia College. He completed his education at the University of Georgia, graduating in 1959. During his stint in the U.S.Army, he served in the 8457th Military Police.

In 1957, he married the love of his life, Mary Lynda Stevenson, who was also from Lincolnton.  In 1959, having no previous coaching experience, he became the head coach at Mary Persons High School, where he remained for his entire career. He always said he had the best job in the world because he was allowed to do what he loved in a place he loved.  Under his leadership, throughout the 39 year career at Mary Persons, his teams compiled 346 wins, 109 losses and 4 ties. The Bulldogs won 15 Region championships and made 4 appearances in the state finals, winning the AA State Championship with an undefeated season in 1980. In 1996, he became the “Winningest Coach in Georgia High School History,” with 316 wins.

Besides his family members, he is survived by the many coaches and players he had the pleasure to work with throughout his career.  The family hopes each individual realizes what an impact he had in the life of Coach Pitts.

Family may be contacted at the residence 221 Newton Drive in Forsyth.

Monroe County Memorial Chapel has charge of the arrangements.

To send flowers to the family or plant a tree in memory of Coach Dan Pitts (Courtesy Obituary), please visit our floral store.